So this is the question: How do you capture this city in a blog post? I could focus on monuments or cafés, or restaurants, or people, or the unusual, or pastry shops. Judging by my pictures, this will be first and foremost a view of Paris via its pastry shops, along with a few other side interests. Here we go!

One of the first sights was the forlorn-looking Notre Dame.

There is not much to say as the pictures speak for themselves. 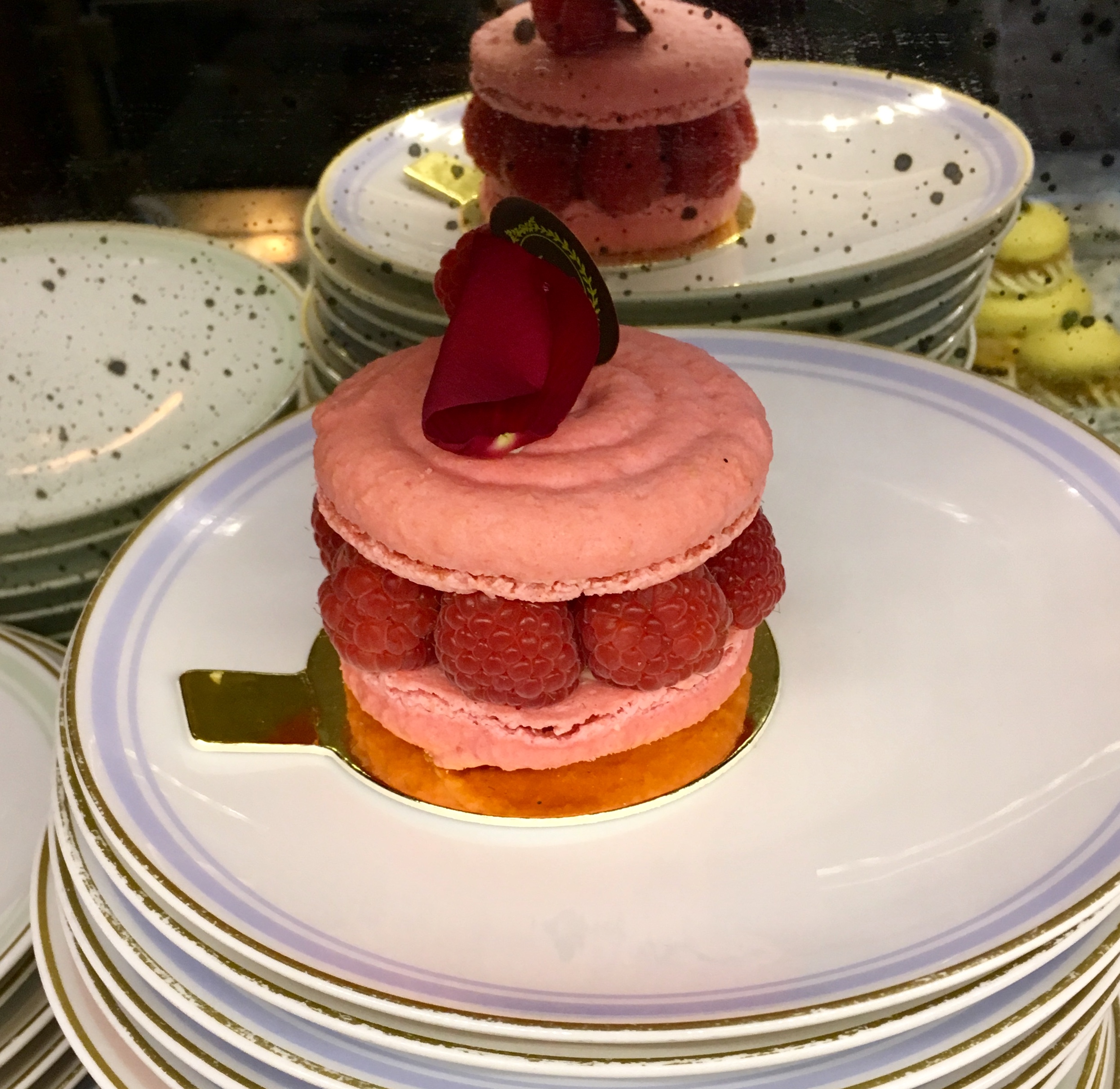 Ladurée, the iconic pastry shop in Paris, was our first pastry stop where we caught up with an old friend. This high end shop was established in 1862 and reportedly sells over 15,000 macarons a day from its various shops. There are 15 shops in Paris (and many more worldwide) and the one pictured is at 16, rue Royale, just down from the Madeleine church. Although Ladurée makes other treats beyond the macaron, it is know for this little gem and was the first to create the double-decker macaron, a macaron sandwich with a ganache filling. If you are sad to have your single little macaron disappear in one or two bites, you can also order a larger version as shown in the last picture.

View from inside the Picasso museum.

New day; new adventures: Picasso museum visit followed by a moment to rest our feet in a neighboring café: coffee and a simple pain au chocolat (think croissant with chocolate).

On our way through the Marais neighborhood, we came past Christophe Adam's shop: L'Eclair de Génie. This is another big name in the world of pastry where the pastry chef has brought the éclair to another level of flavors. Since we had just had something to eat, I bought a single raspberry éclair to share, even though the tasting box of four looked very inviting. These éclairs are beautiful works of art with outstanding flavor. This 6 euro éclair (now you know why I didn't buy the tasting box!) is smaller than a traditional éclair which sells for about 2-3 euros. I'm glad to have enjoyed at least part of one of these éclairs.

A visit of the Louvre definitely required another sit down moment!

The Eric Kayser bakery and pastry shop, another well-known name that does not disappoint, is not far from the Louvre. We could have had a pastry, or even a cookie, but decided on a raspberry financier. This one looks a lot like a muffin, although traditionally they are in the shape of a rectangle. Made with almond flour and brown butter, it a moist, light treat with a crisp exterior. So good!

On our way up to Rue des Martyrs, we walked through the gardens of the Palais Royal, a royal palace created by Cardinal Richelieu in 1633 that housed royal families up until the Palace of Versailles was built. The gardens are beautiful as are the "Colonnes de Buren"--260 black and white stripped octagonal columns.

You never know what you might find--cute kid posing for his dad, pétanque players, or a film crew. We watched a moment, heard someone sing Edith Piaf's "La Vie en Rose" and then had to ask security what it was all about. They were filming "Emily in Paris", an American comedy-drama television series that will come out in 2020.

Rue des Martyrs which passes through the 9th and 18th "arrondissements" or districts of Paris, is an historic route lined with shops and restaurants leading to Montmartre. We walked passed the tourists at Sacré Coeur basilica and popped into a very small café to order a coffee at the bar which then allowed us to use the restroom. We were back on our way to a beautiful bakery near the Canal St. Martin called "Du Pain et des Idées" (bread and ideas). We bought a square of the smokey "pain des amis" (bread for friends or friend bread...). These are huge loaves cut into cubes. Flavor and texture are outstanding!

I wanted to try the "escargot" (snail) pastries since I've only had the chocolate and raisin versions. These were chocolate pistachio and berry. But one can only eat so much. Next time.

A friend of ours says that putting up scaffolding to clean/repair buildings is about as expensive as the cleaning/repair work itself.

Minor repairs take the skills of a mountain climber.

In our travels through the city, we found the oldest pastry shop in Paris: Stohrer, which has been selling baked good since 1730. The interior is museum-like and very well preserved. The desserts? Remarkable. It was lunch time and we took a savory goat cheese-tomato-zucchini tart.

With some new energy, I wandered through 2 pastry supply shops, la Bovida and Mora. So many tools, molds, etc. I did come out with a little bag of some items I was looking for.

The G. Detou store is like a super crowded, super well-organized hardware store, except that this one is filled with, as the store front says, "tout pour la pâtisserie et la cuisine" (everything for baking and cooking). I first heard about this shop in David Lebovitz's book, The Sweet Life in Paris, and then when I saw it, I had to take a peak. Indeed, it is an amazingly well-stocked shop with everything you could ever need or want. I imagine this is where I would go if I would be baking in Paris! The name of the store, J. Detou, is a play-on-words meaning "I have everything."

The Marais district is home to many "hôtels particuliers"—or very grand townhouses. Some have become museums, such as the Picasso museum, or even youth hostels, such as ours, called l'Hôtel de Fourcy, a 17th century "house". The one above, l'Hôtel de Sens, was a private medieval mansion, now an art library with a beautiful garden.

One evening, we went to the Champs-Elysées after visiting a friend. It was past 11pm and some of the shops were still open, including the Pierre Hermé pastry and chocolate shop. Macarons are again the highlight.

Another shop is located in the Marais district. This pastry chef began his career at the age of 14 and is known as the king of modern pastry because of new flavors he has created. I know I should have tasted one. Next time.

In between walking, climbing steps, and then more walking, sitting time is a treat. Here, in the Luxembourg gardens we got a little rest, some sun, and enjoyed watching people and admiring perfectly groomed flowerbeds.

A necessary stop for me in Paris is the Poilâne bakery, which is known for its breads. The traditional bread, baked in a wood-fired oven, has a subtle tang of sourdough, a thick crust, and a deep flavor from the stone-ground wheat flour. The 4 pound loaf is substantial and so I asked to have only a part of it, sliced. Wrapped in tissue paper and then placed in a brown bag, it felt like I was carrying around a present.

I saw this pastry made on a recent baking show and then saw it in a bakery in the Marais. It is called the Kouign-Amman, a Breton pastry that the New York Times calls the fattiest pastry in all of Europe. The name comes from the Breton language meaning cake and butter. That gives you an idea. It is sort of like a sweetened puff pastry with fewer layers. Imagine a caramelized croissant.

It is airy, slightly sweet and crispy on the outside. It doesn't really look like much, but I loved it!

And it was especially good as we read the paper, sitting in a café, out of the rain.

Our visit over, I know that there are still more pastry shops to discover, but that will have to be for a another time.

Leaving the best to last was enjoying desserts with friends we hadn't seen for many years: a homemade tarte tatin (upside down apple tart) at the end of a long dinner, and not one but two Corsican cakes (a cheese cake and a cake made with chestnut flour) during a late afternoon tea with other friends.