Today we made one of my favorite French desserts: the succès au chocolat or "the chocolate success". It was invented by pastry chef Gaston Lenôtre, one of the most respected names in the world of pastry. It can be made in several flavors: vanilla, dark chocolate, pistachio, strawberry, etc. We made ours with chocolate.

The other three people with me in the class all had a story on how this was their favorite treat when they were young and that even now they still enjoy it. I guess that is why it is called a chocolate success!

I have seen this dessert presented in different ways (smaller, taller, more layers, different sponge cake, etc.) The one I prepared is a round dessert made of two thin layers of almond sponge cake separated by two layers of chocolate ganache. The top of the cake is then covered with tempered chocolate. 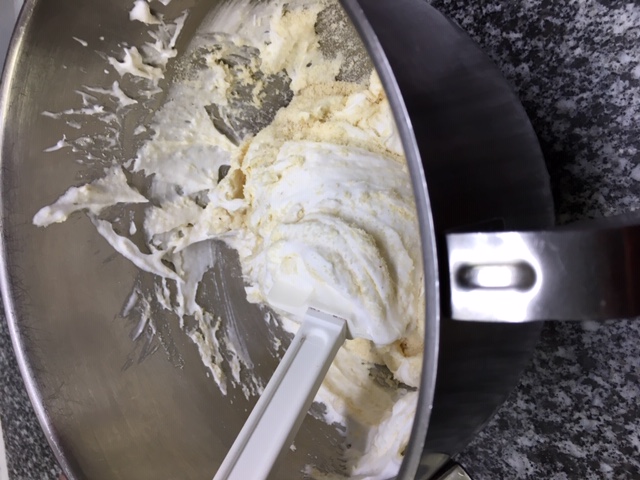 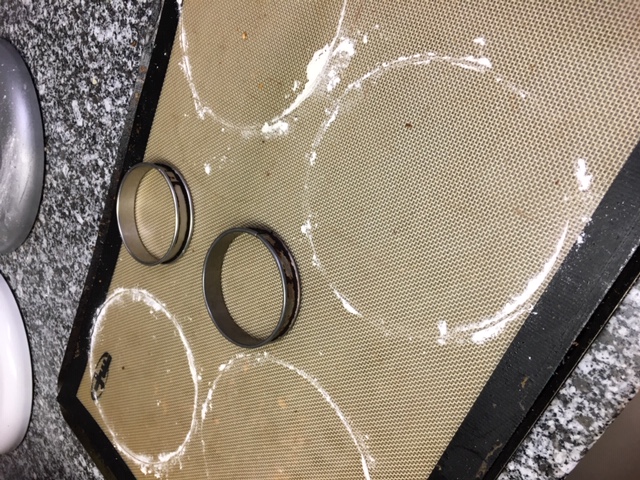 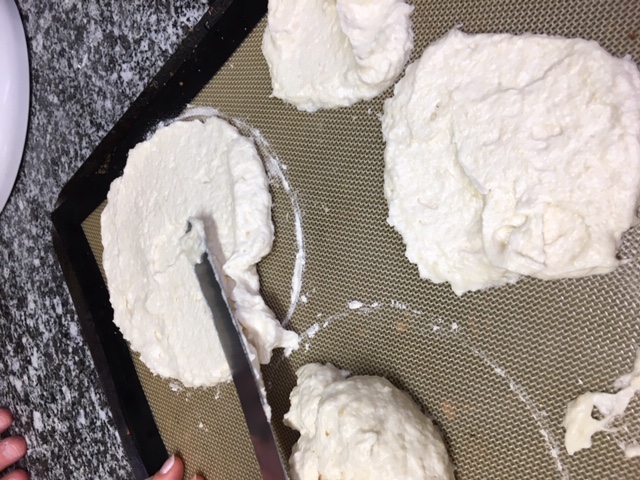 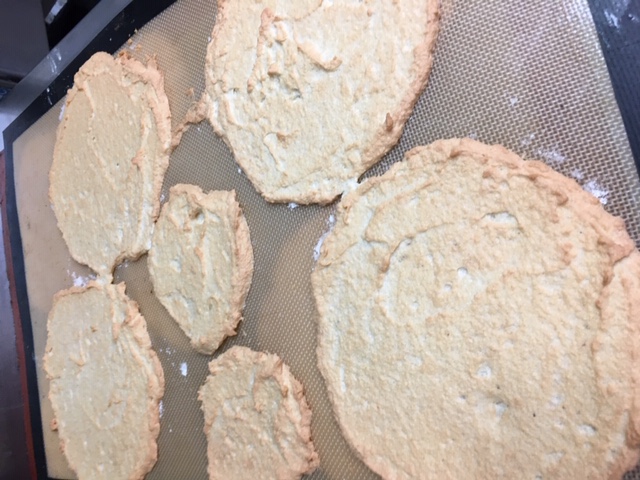 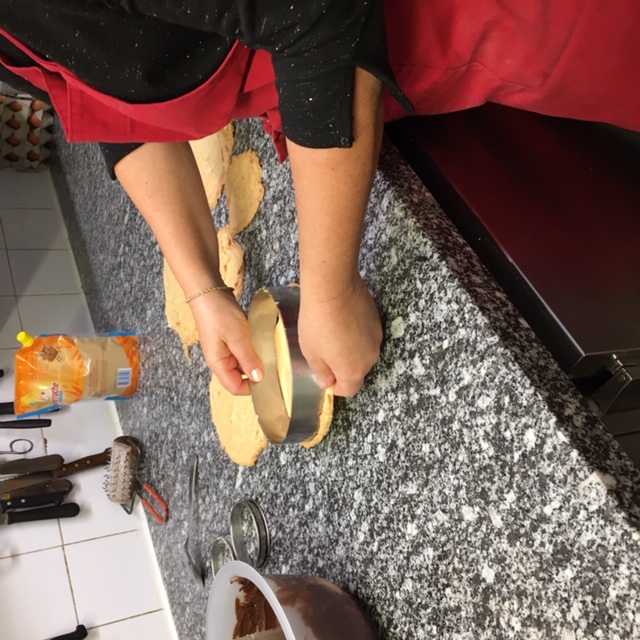 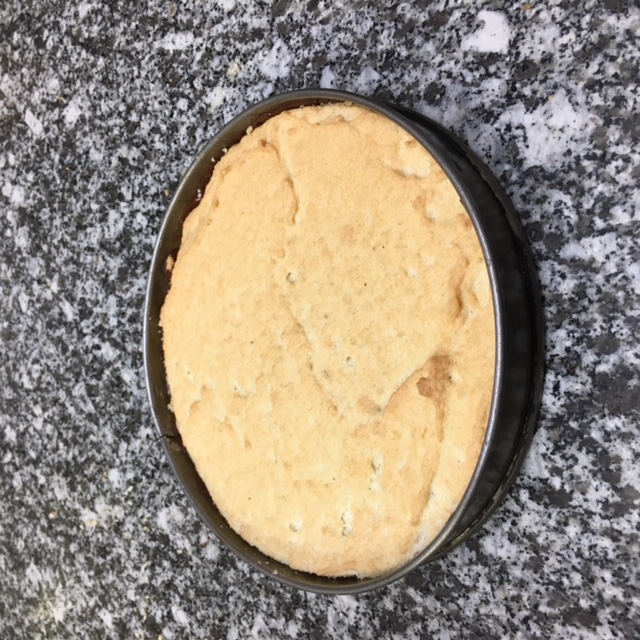 The almond sponge cake is one of the more expensive sponge cakes used in French pastries because of the almonds, but it is what makes the dessert very flavorful.

You'll see in the second photo that the outline of our sponge base is made by dipping the cake ring in flour and "stamping" the outline on the baking mat. The two small rings are for individual pastries. Once baked, a cake ring is used to cut off the rough edges.

Ganache: dark chocolate + heavy cream, or a combination of heavy cream and milk. Next step: once the ganache is spreadable, it covers the first layer of almond sponge cake. The second layer of cake is added and finished with a second layer of ganache. 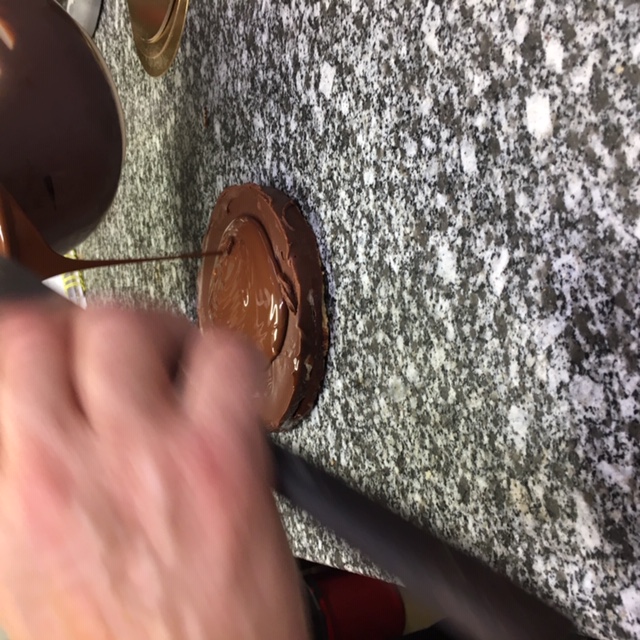 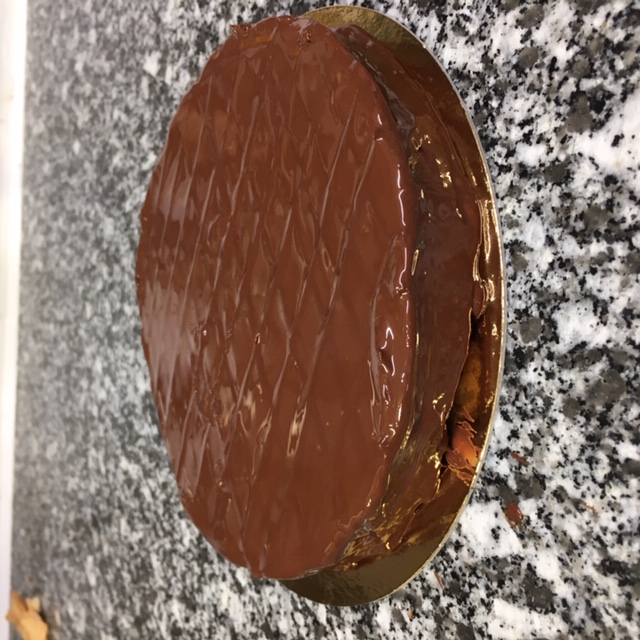 The cake is chilled and then a thin layer of tempered chocolate is poured over the cake. The top of the cake is not usually decorated apart from a pattern in the chocolate.

Although this cake is thin, the ganache makes it very rich. Thin is okay.

I also made two tarts:

This tart is typically a summer dessert. It is made of a short crust pastry (pâte sablée), a raspberry cream filling, a passionfruit cream insert, and fresh raspberries. 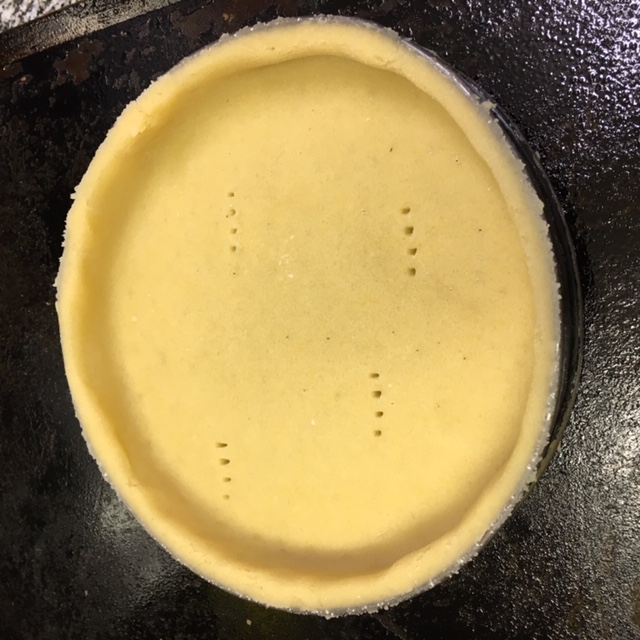 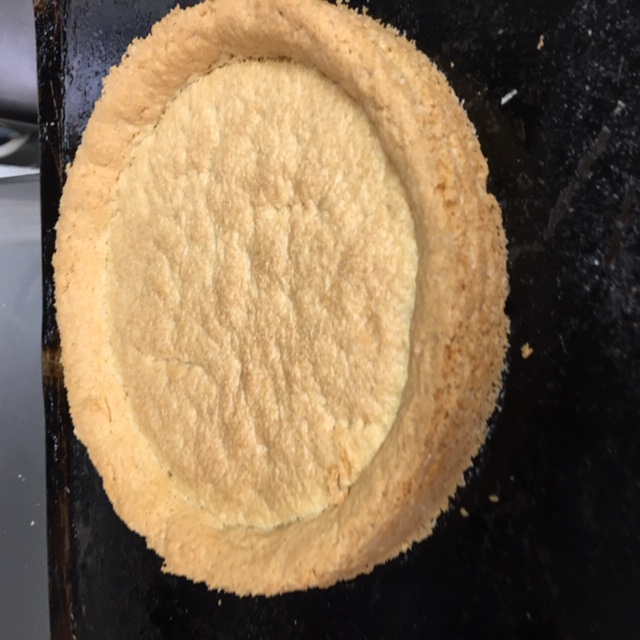 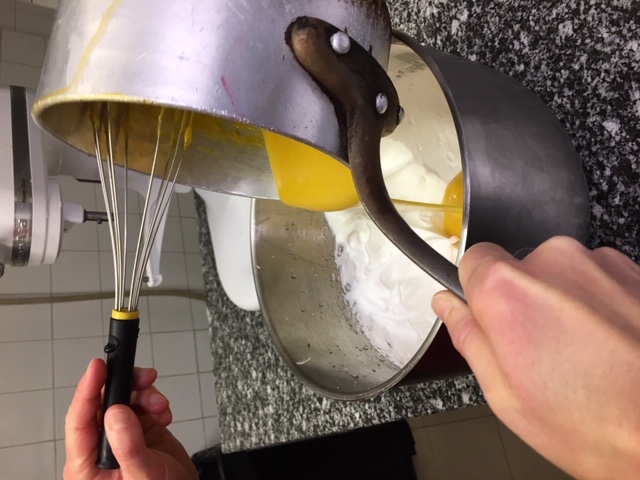 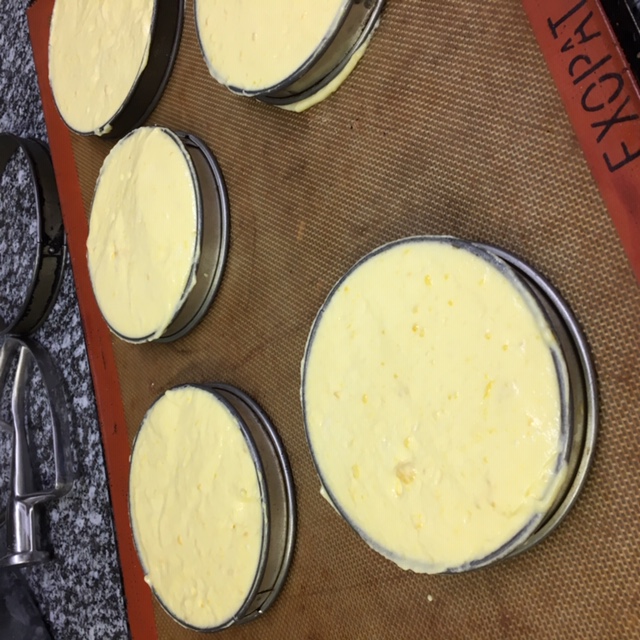 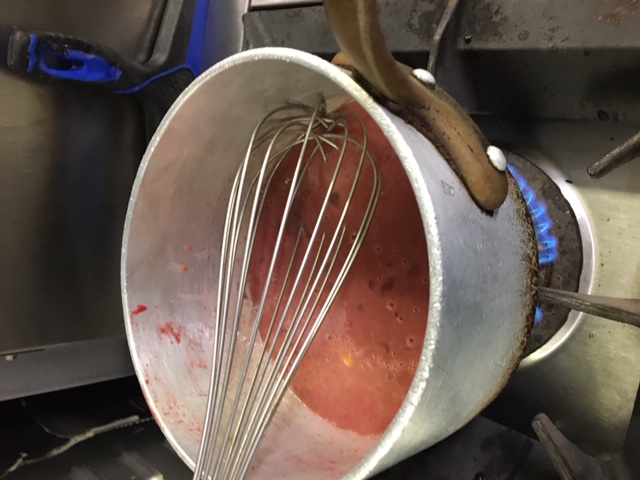 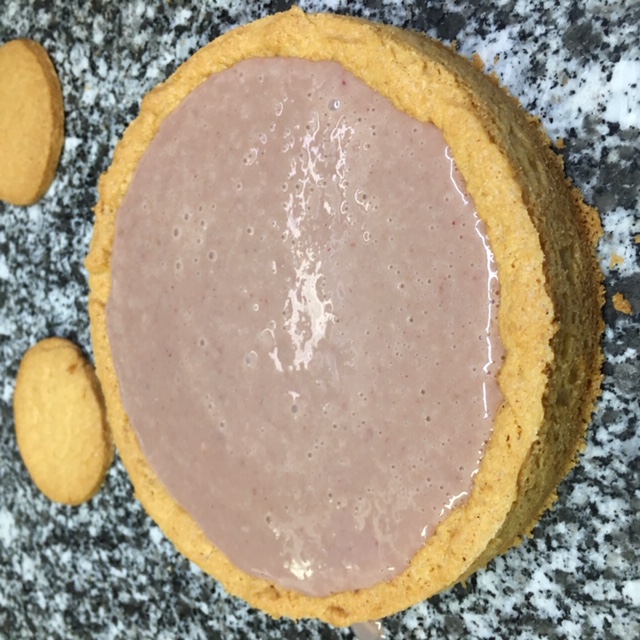 A raspberry cream filling is made with raspberry purée, sugar, eggs, gelatin, and butter. It fills the tart shell I made earlier on and then put in the freezer to set. 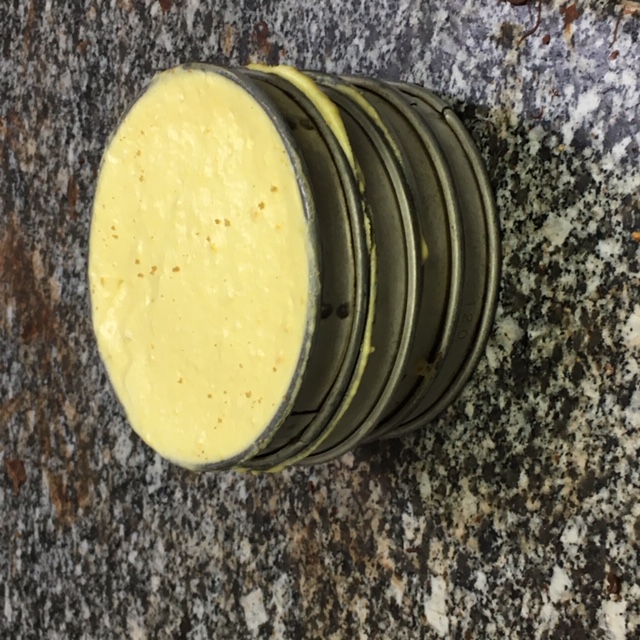 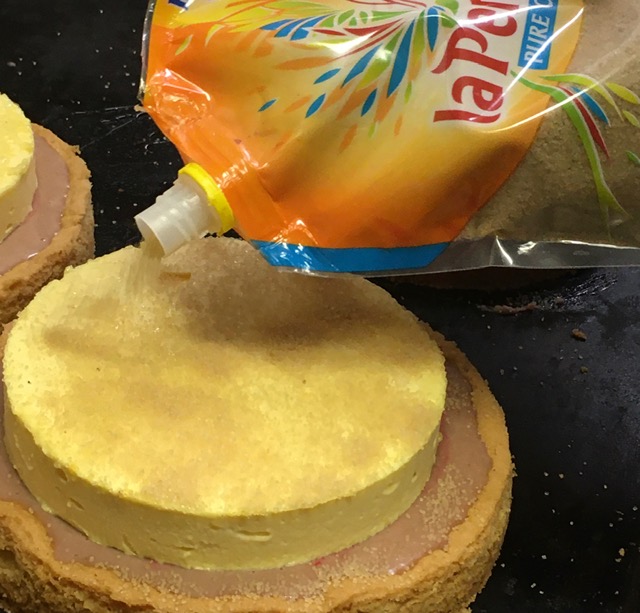 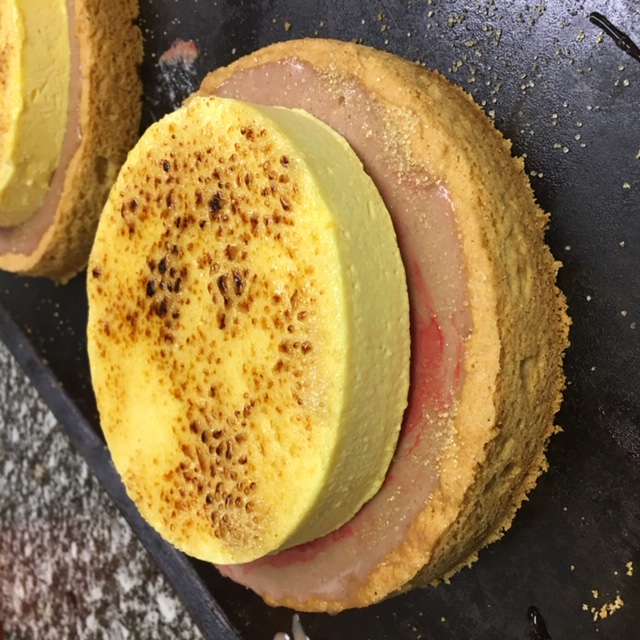 Putting the components together is the fun part and you finally get to see what the dessert will look like. The metal ring is removed from the passionfruit cream insert. Since the insert is frozen, it lays nicely on top of the set raspberry cream. A sprinkling of brown sugar, caramelized with a small blowtorch, like for a crème brulée, finishes the top and adds a bit of crunch.

The final touch is to add fresh raspberries which complements the raspberry cream and passionfruit insert perfectly.

A summer dessert to enjoy on a December Sunday!

From the Italian "all fruits", the Tutti Frutti tart is a fruit tart made with the same short crust pastry that was used for the tarte chibouste passion. To this base, two different creams are added, one chocolate and one vanilla. Fresh fruit becomes the final layer. 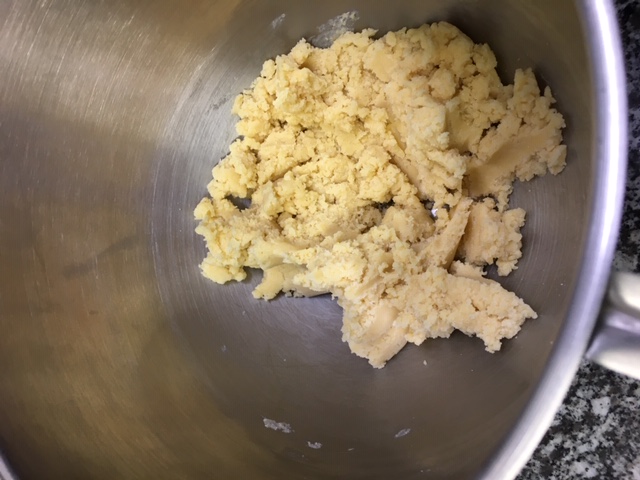 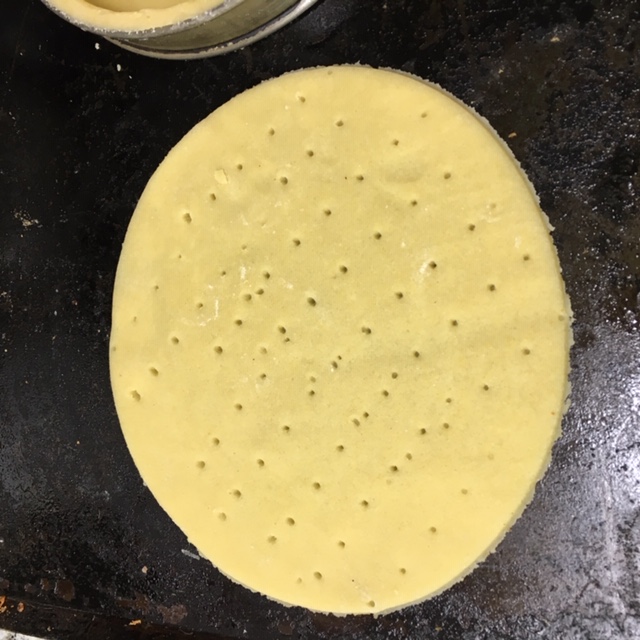 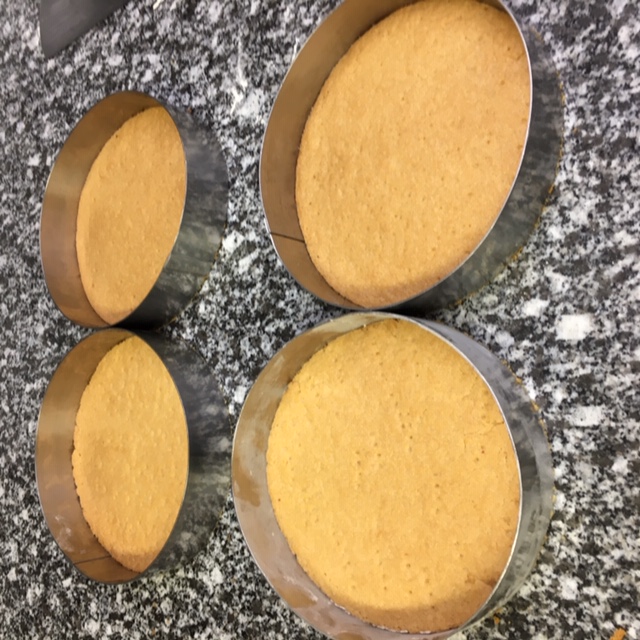 The pastry is mixed, rolled out, docked, and baked. Once out of the oven, the cake ring punches out the exact size needed to fit inside the ring. 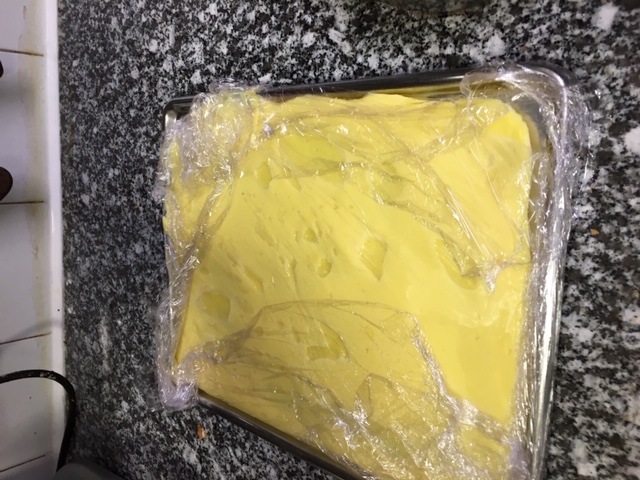 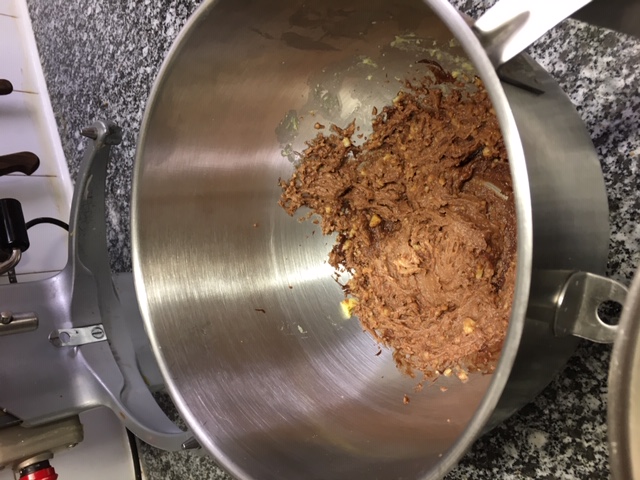 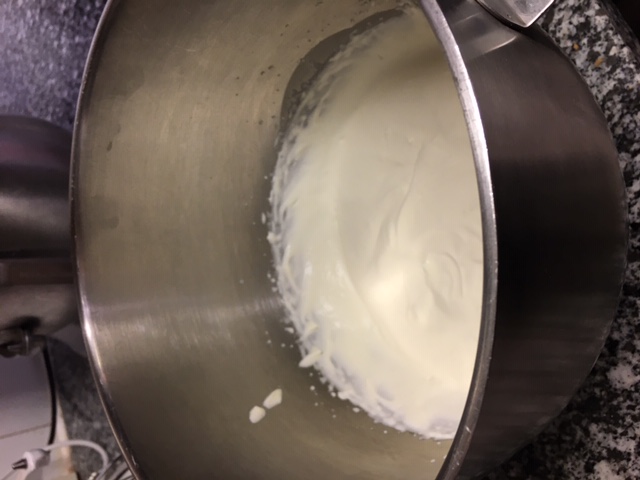 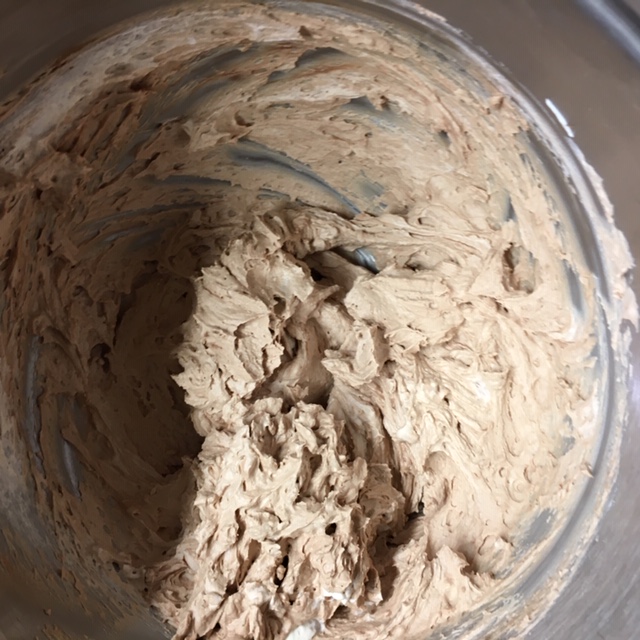 The chocolate cream involves three preparations. First, make a pastry cream, and let it cool. Then make the ganache and let it cool. Once these two elements have cooled, you whip the cream. Usually you make the pastry cream and the ganache before making the tart base so that they have time to cool, which is what we did. Once these elements are ready, the cream is easy to assemble. Pastry cream is first mixed with ganache and then the whipped cream is folded in. 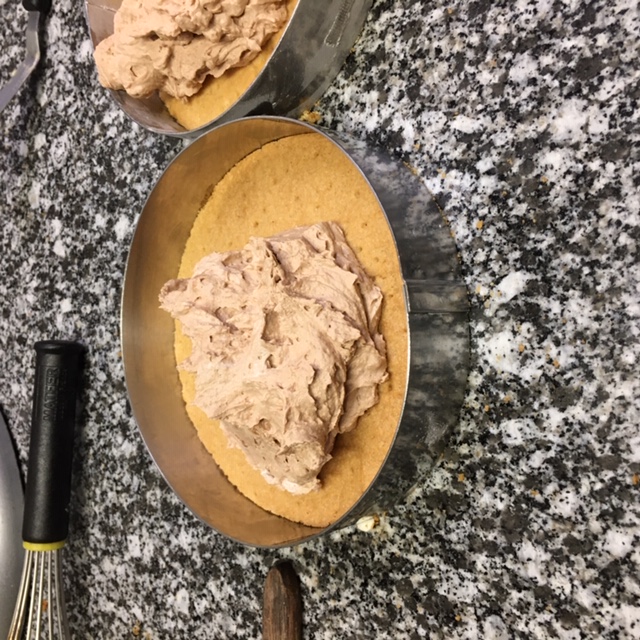 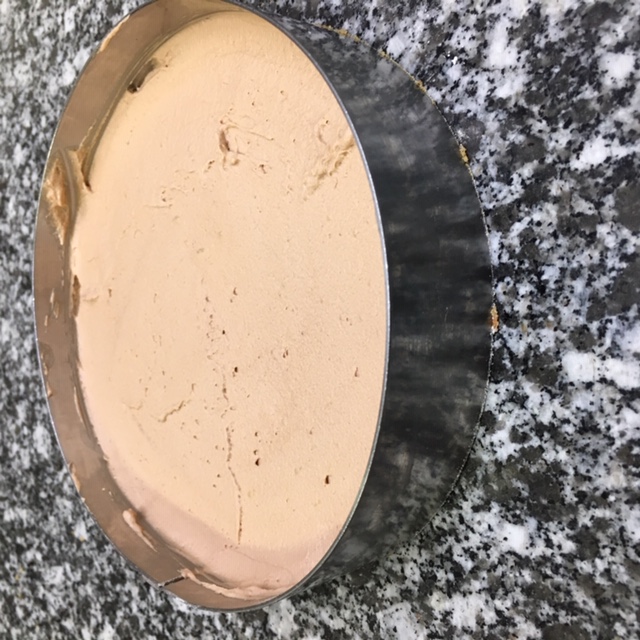 Spread chocolate cream over the base of the pastry crust.

The vanilla cream is made like the chocolate cream without the addition of the ganache. It serves as the second layer of the tart. At this point the tart is placed in the freezer to set.

Once set, the cake ring is removed and the finishing fun begins.

Melted chocolate is applied to the outside edge.

And a selection of fruits decorates the top of the tart.

Warmed apricot jam, brushed over the fruit, is the finishing touch which seals the fruit, adds a bit of sweetness, and a shiny look to the dessert. The dessert is now complete!

On the whole I was pretty happy with these desserts and was excited to bring them to French friends with whom we were having lunch. My one thought was that the chocolate dessert, the "succès", could stand a bit of a neater finish. Now to see how they look inside... 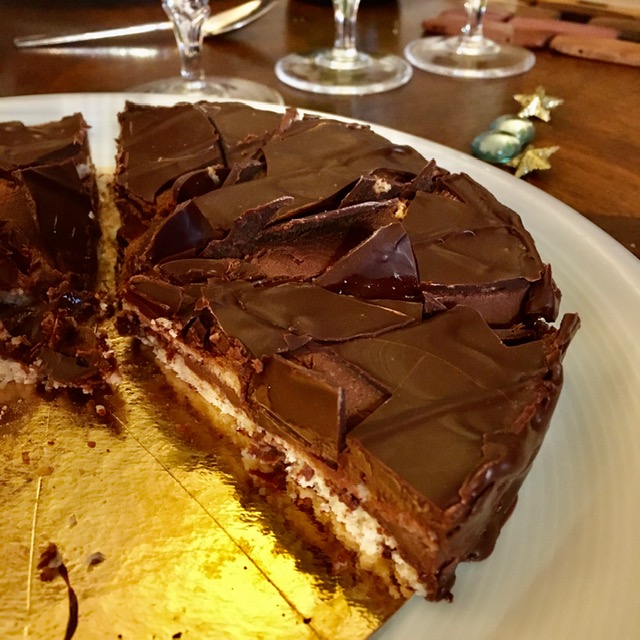 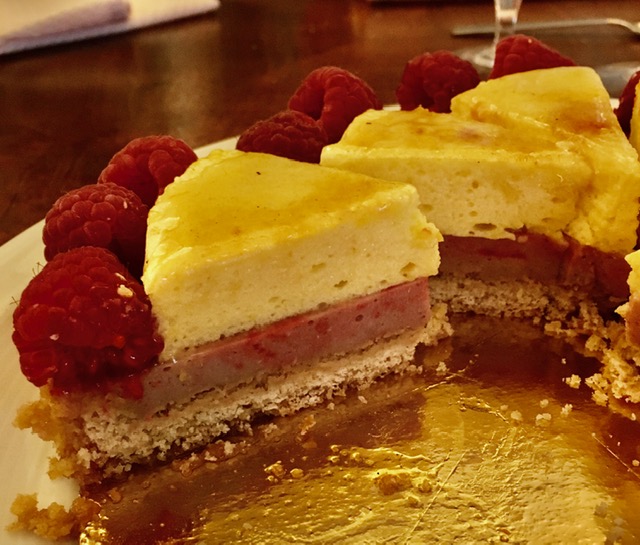 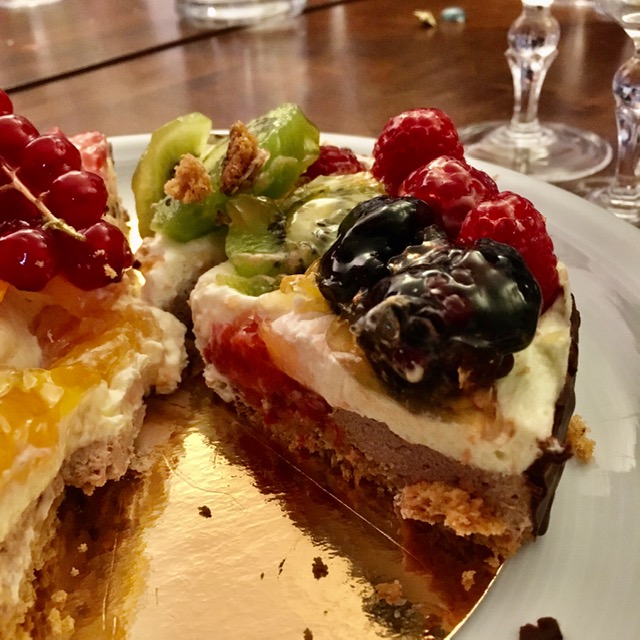 As I guessed, the chocolate on the top of the "succès" was a little thick and did not cut as easily as it should. It still tasted very good. The other two desserts were light, not too sweet and wonderfully flavorful. We all agreed that they were a delight!

I have one class left before returning to Grand Rapids. More to come!